DEAR ‘CREEKNIKS: In retrospect, it might have been a little impulsive. But can’t a farmer just DO something once in a while without planning 7 years ahead, gaming the weather, and groveling for another operating loan? Well, we rolled the dice and did it. We planted a crop of pianos. 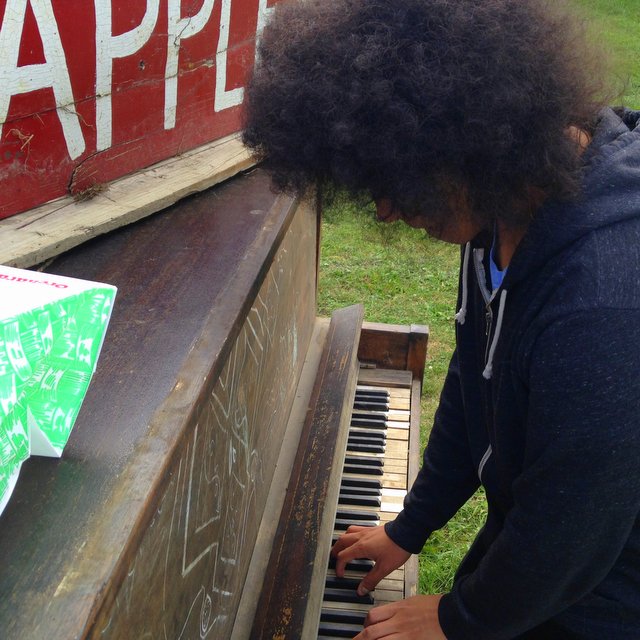 And, as you might have expected… We got a little too much rain for these tender shoots.  Within two days the pianos had swelled to bursting.  (But not before a little holiday weekend magic.  Young lads, unbidden, tickling the ivories, unburdened by the worries of the world…)

We know what you are going to say:  We should have planted more pianos.  You are right.  Don’t worry – we are on the job.  We are scouring Craigslist for freebies, and we will build a vine-roofed pole barn for each new planting.  Should be ready in 7 years.  Meanwhile, these first plantings are your silent beacons for finding the Dwarf Orchard and playground.  Yes, the pièce de résistance by our much-maligned Department of Signage and Collective Morale.

Last night Farmer Steve said, “You can say whatever you want in this crop alert.  It won’t matter.”  He said as soon as Farmketeers see the word HONEYCRISP, they’ll drop their email gadgets and bumrush the ranch.  In 3 days or less the prized apples will be scarce as deviled eggs after a church picnic.  Come one, come all.  But, first find, first pick. 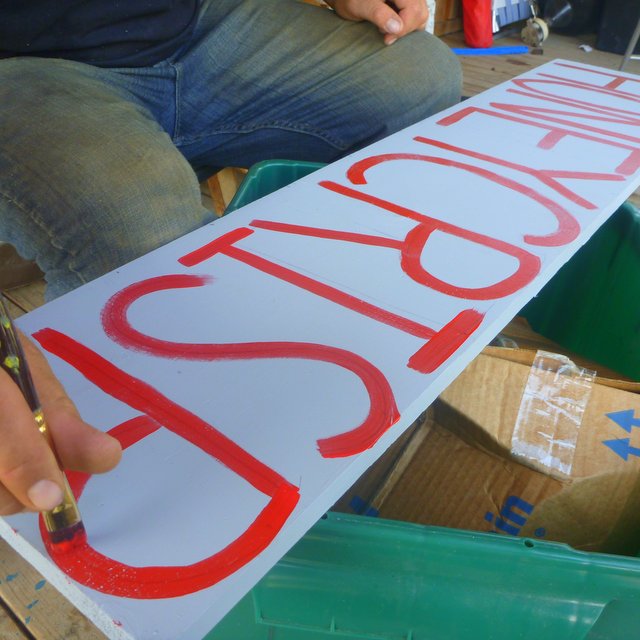 Free rubies, emeralds, and sapphires!  That is what the human brain hears when you whisper U-PICK HONEYCRISP.  Trying to arrange an orderly weekend of U-PICK HONEYCRISP is like slinging a hammock between two cornstalks.  Why bother?  We will see all million of you in Rows 12 and 13 of the Dwarf Orchard.  Be nice as you box out your fellow pickers.

Besides U-PICK HONEYCRISP, what else is picking?  In Row 11 you will find the wonderful Gingergold.  If you like ginger and gold, you will like Gingergold.  In Row 12, pick Jonamac – a cross between Jonathan and McIntosh – alongside NYS674 which was eventually renamed “Autumn Crisp” by the Mad Men at Cornell after the labcoats had completed their Frankenappling.  Autumn Crisp is a cross between Monroe and Golden Delicious.  We PREFER it over Honeycrisp.  Finally, ask at the stand about the special trees of golden Gala mutants called “Blondees” in Row 2.

Pears are still picking.  We’re counting on you to wipe them out this weekend.  Note that these Bartletts, unlike apples but like other pears, ripen from the inside out.  Bite one on the branch and you’ll think, “Meh.”  Give it the brown bag treatment for a couple days, and you’ll think, “Heck yeah.”  Pick them now BEFORE they turn to mush.  Poach for fancy! 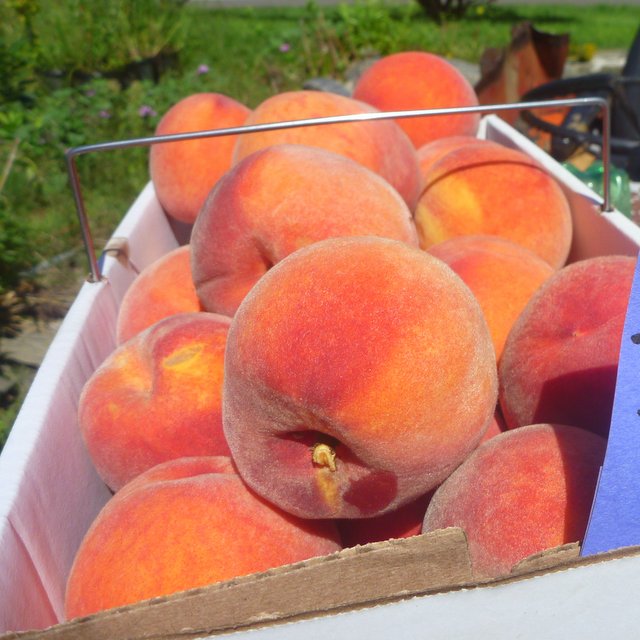 You peach monsters pretty much demolished peach u-pick season.  A lucky few will find the odd scattered late ripening peach.  But we have the farm stand STOCKED with juicy peaches at the same price as u-pick, $1.75/lb with breaks at 20 pounds ($1.50/lb) and 40 pounds ($1.25/lb).  Could be the final weekend. 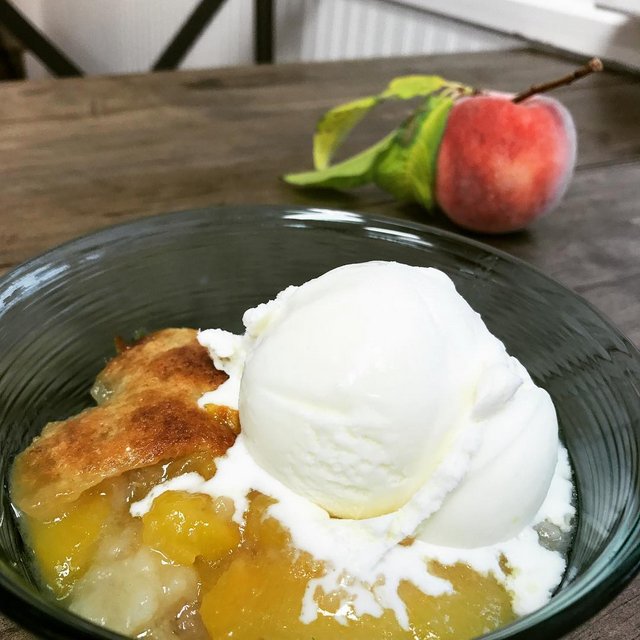 Well, hello, homemade ice cream and peach cobbler!   A neighborly greeting to @ithacaicecream for posting this beauty featuring peaches from The ‘Creek, flour by our friends @farmergroundflour, and Sweet Melissa’s own homemade ice cream!  An Ithaca and Trumansburg favorite. 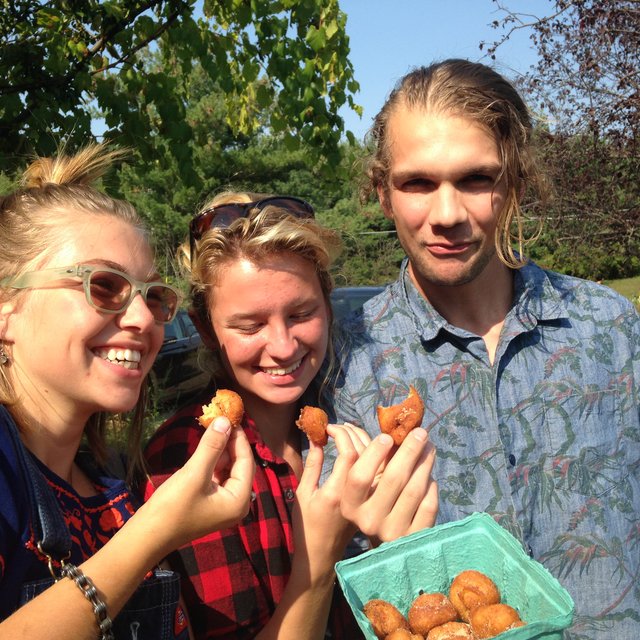 Donut season!  Served hot every Saturday and Sunday 10 AM to 6 PM.  These are infused with fresh-pressed Orchard Ambrosia.  Three cheers to this cheerful gang.  Full disclosure:  They got a free dozen for promotional services rendered. 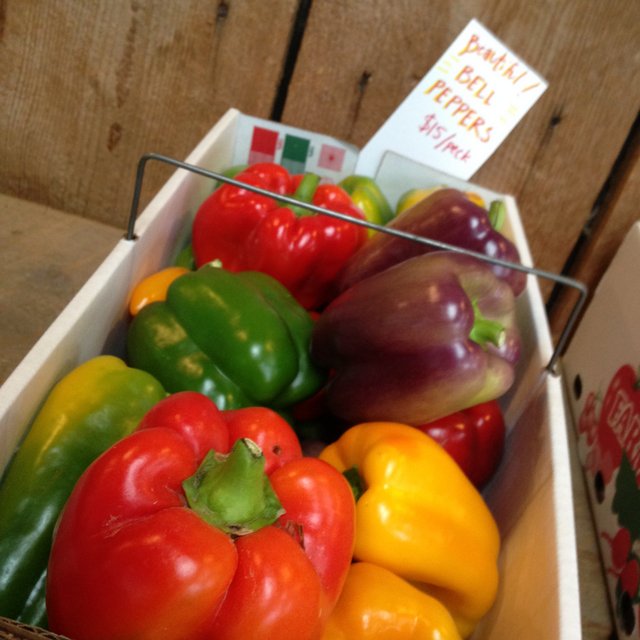 Pay as low as $2 a pound when you buy a Pre-Picked Pepper Peck for only $15!  In the grocery store you can pay up to $4 a pound for sweet peppers.  Look at these beauties.  We’ll do the picking and pecking.  You give ’em a home.

Farmketeer of the Week!  Local explorer @scout.ithaca had the award on lockdown with her Instagram story about an outing to The ‘Creek, starring Zorro and donuts.  Full disclosure:  She got free donuts for promotional services.

Thank you, Scout, for sharing your adventure.  Y’all can follow Scout’s scoutings at @scout.ithaca.

Squash for science!   Thanks to Farmer Professor Jen, our resident theoretical physicist, a sweet dumpling squash from The ‘Creek recently appeared in the rarefied air of the journal Europhysics Letters.  Jen’s paper with collaborator Dr. Tyler Engstrom explores mathematical connections between the folds in your brain, the 2016 Nobel Prize in Physics, and the shape of sweet dumpling squash!  Who knew?!

“Ghost slabs, vortex unbinding, and fugacity.”  Just some of the great fun to be found in Jen’s paper, Surface creasing of soft elastic continua as a Kosterlitz-Thouless transition.  Heady ideas to ponder, Farmketeers!  Hope to see you at The ‘Creek.