DEAREST FARMKETEERS:  To call our twofer sale on Brussel Sprouts a “spree” is surely hyperbole of Fox Newsian or Washington Postian proportions (your choice).  Truth is, we will likely see around 12 customers this weekend.  The sky has gone dim and blarggy and that will freeze the fire in the belly of even the most faithful locavores.  But it would be a most heartwarming surprise if you Farm Fans could times that traffic by 9.  Yes, 108 customers would be perfect.  Especially if you each cut your own “Sprussels” in the field – two stalks apiece making 216 stalks harvested at prime Sprussel time. 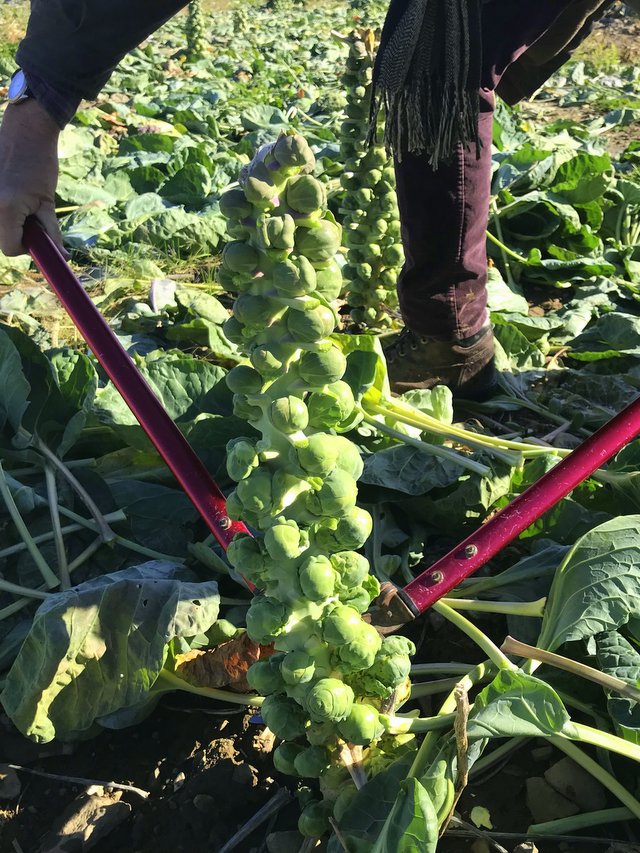 Sprussels Spree!  2-for-1 stalks, u-pick or prepicked!  That’s the same as buy-one-get-one-free.  It’s also the same as half-price, but half the price of two instead of half the price of one.  You could also say 200% of half the price of one.  Anyway, you can get two stalks of sprouts for only $5.  You could also get 1 stalk for $5 (your choice).  You can cut your own sprouts in the field OR simply grab them at the stand.  These are as nutritious as ever, but as Farmer Steve reported last week, “they are not the best sprouts we ever grew.”  It was a wet and buggy year so you will find that each stalk bears some good sprouts and some sprouts that you might offer humbly to your hamster.  It’s not that you’ll find bugs in the sprouts, just that the leaves have holes from earlier in the growing season.  Anyway, as you all know by now, every week we must come up with a new nickname for Brussels sprouts or we die.  Like a shark that has to keep swimming lest it sink to the seafloor – or Sisyphus rolling that eternal (infernal!) rock uphill.  Last week was Bruxellesproux and before that was “Br’zzouts” and before that was “Brazzle-Sprozzles” and before that was “Brouts” and before that was “Sprussel Brouts.”  They all worked pretty well; we stayed alive.  This week, we landed on Sprussels.  Come load up on Sprussels at bargain basement prices – two stalks for only two-and-a-half two-dollar bills – and fry them up on a chilly November night. 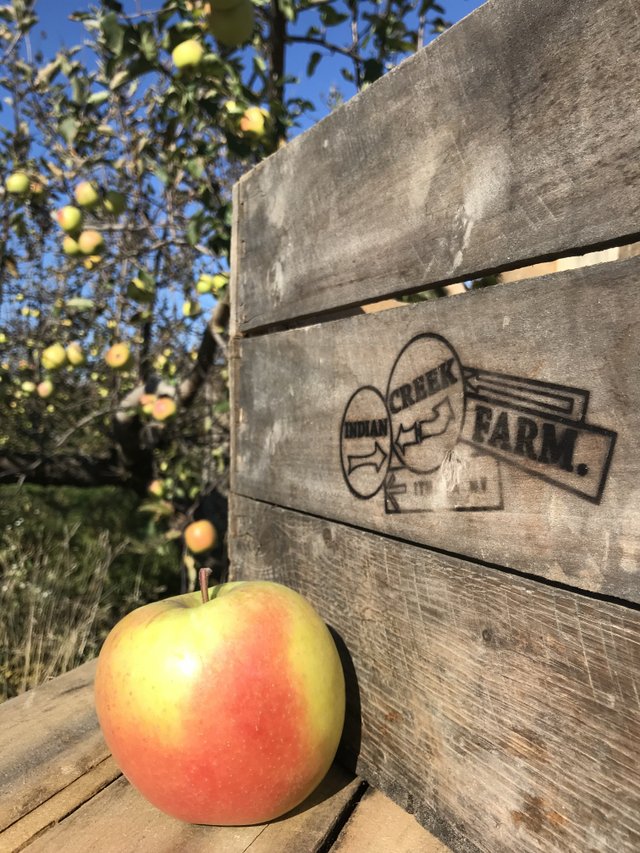 All apples are only 99¢ a pound, u-pick or prepicked!  There’s no price difference whether you pick your own apples in the orchard – have fun hunting, you won’t find much – or grab them at the stand.  Farmer Cal here at the stand says we have Newtown Pippin, Ashmead’s Kernel, Northern Spy, Golden Delicious, Mutsu (a.k.a. Crispin, your choice), and perhaps a few others.  These are great apples, some you will never find in a grocery store.  The sale price of 99¢ is the WHOLESALE price that we offer to big buyers like grocery stores, but this year – in recognition of your best picking season ever – we’re going to run out the year with 99¢ a pound to anyone who wants to load up for the off-season.  Thank you!  This could be the last weekend of having the stand decently stocked with apples.  Sauces, pies, snacks – stock up. 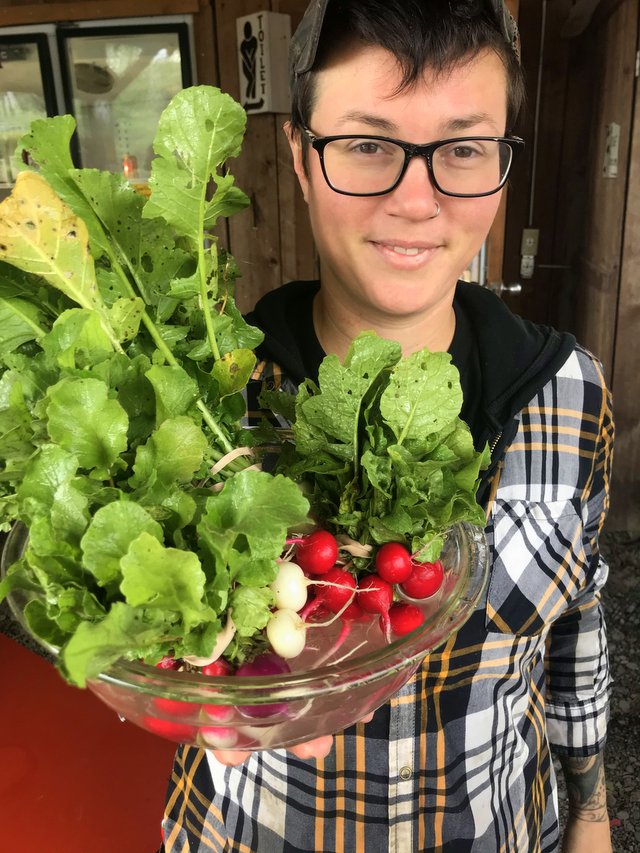 Cal’s radishes (and Cal) are still here… for now.  On weekdays the stand is operating self-serve, so you might not see us around.  But Cal is keeping things stocked through the week and will probably be here on the weekend.  Not sure about staffing the following weekend of November 16 & 17.  We’ll play it by ear and announce next week.  But this could be your last chance to load up on apples, sprouts, radishes, and squashes.  Cal still has several kinds of radishes (your choice).  We’re closing every day now at 6:00 instead of 7:00. 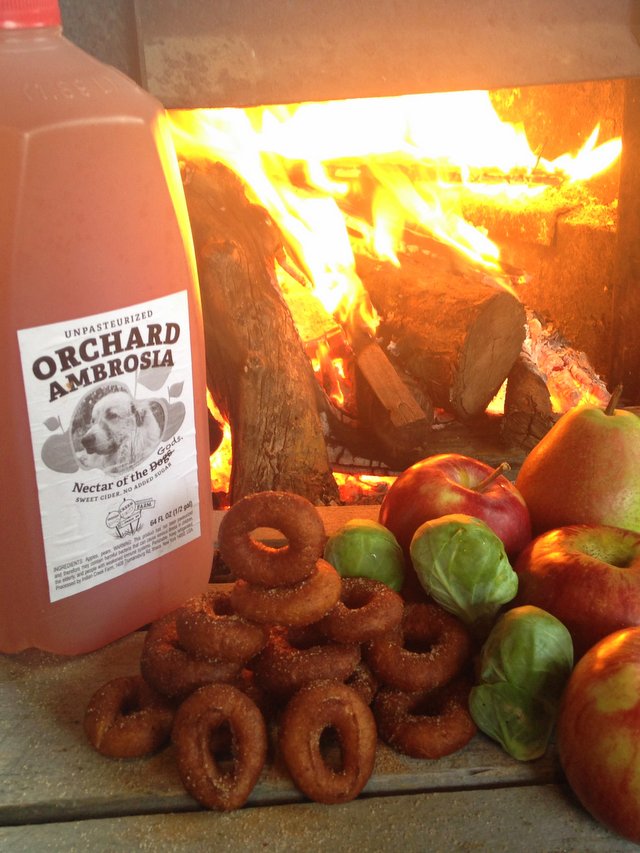 And probably last chance for donuts.  Nick the Donut Kid is shrinking his hours down – 11:00 to 5:00 this Saturday and Sunday.  Next weekend is unknown; only the Donut Kid knows and he’s not talking without a subpoena.  This weekend you can get your freshly fried toroids of fructotic doughnosity by the dozen or half-dozen, and if you want cinnamon sugar (your choice), simply whisper, “A sprinkle of SIN, SUGAR.”  You can wash down your donuts with freshly squeezed sweet cider, known around here as “Orchard Ambrosia” – 100% unpasteurized old-time juice of apples and pears.  It freezes great for Thanksgiving or off-season storage.  Just drain a little off to allow for expansion.  Now is the time to put up cider for the winter; these weeks are the best blends of the year and it’s not clear how much longer we will be pressing.  We’re brewing hot mulled cider, too, which you can get in cups at the stand. 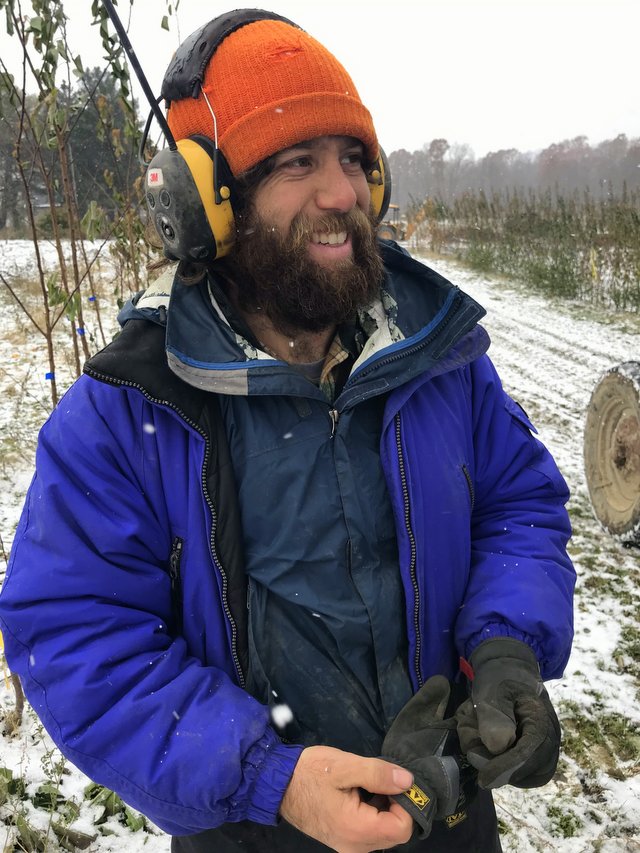 Everyone has been asking, “What are you farmers doing now that the season is ending?”  Would you like to know?  (Your choice.)  Two things are afoot.  First is the small matter of digging up fruit trees – 40,000 of them – for safe winter storage in the barn. 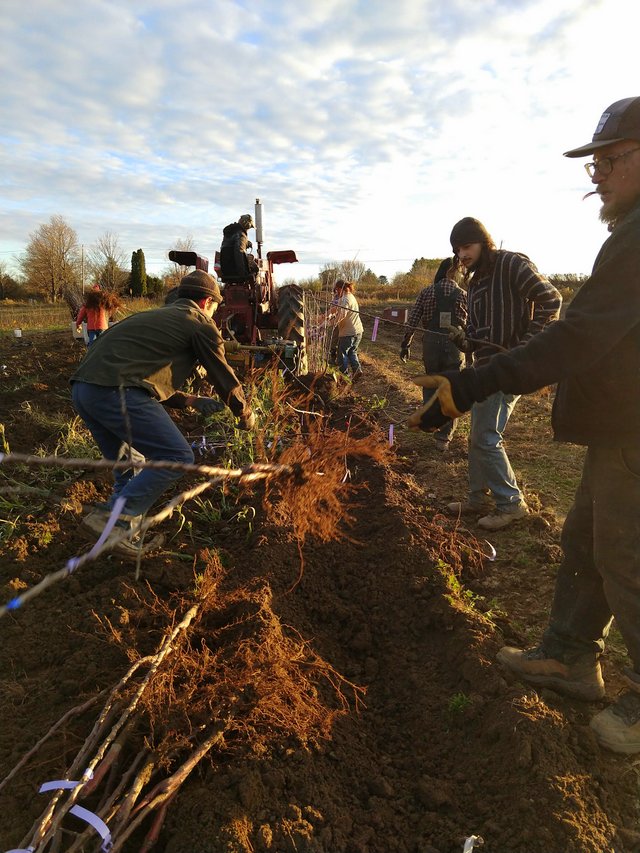 You can order fruit trees for spring planting in your backyard orchard:  apple, peach, plum, cherry, apricot, and pear trees.  In fact now is the time to order before professional orchardists and cideries swoop in and buy up the inventory.  They will buy hundreds of trees at a pop.  You can buy 1 tree or 3 trees or 5 trees… or any even number (your choice). 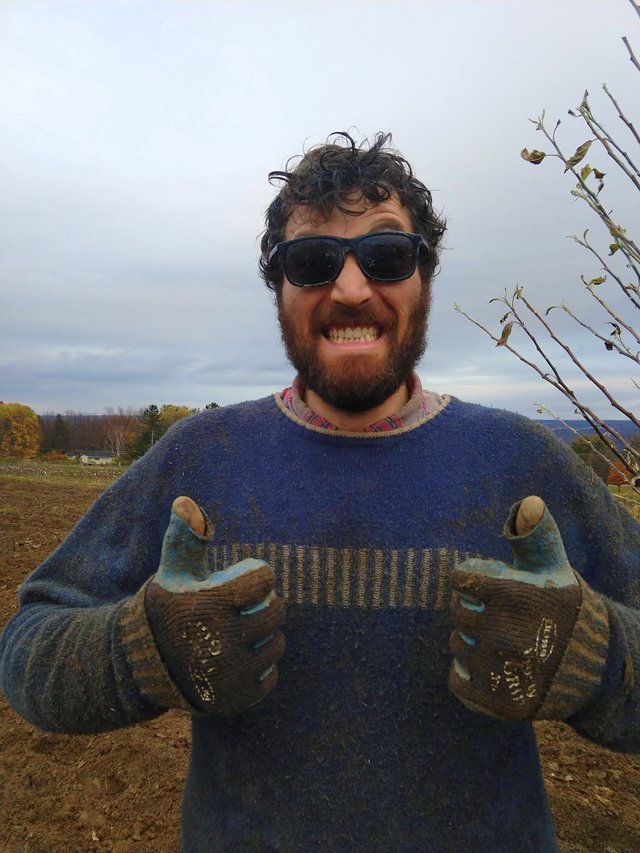 You can see the current stocks and order online through our nursery web site:  Spring 2020 Fruit Trees.  Our nursery is called Cummins Nursery.  Same people as us.  Same farm, too.  Just a different name to confuse as many people as possible.  Trees ship in March and April, or you can pick up here in spring (your choice).  If you pick up, you will be greeted by a friendly fruit tree person who will look totally sane and normal after spending a whole winter in a dark wet barn full of trees and mud and classic rock on the radio nonstop. 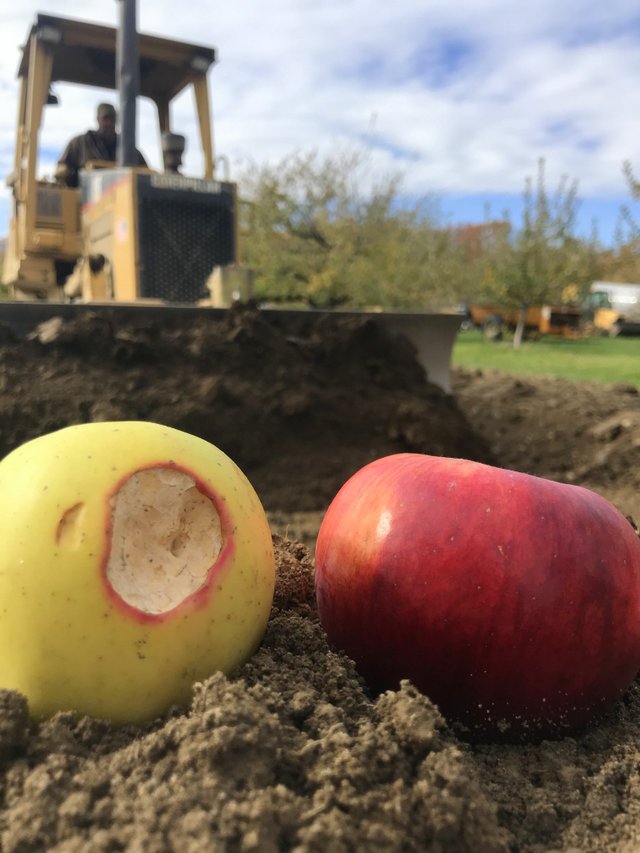 The other November job is also a digging project.  It must be dug before the ground freezes.  Has to be dug to exact specifications – a perfect rectangle in the orchard, about the size of a backyard hockey rink in the ‘burbs of Boston, 8 inches deep and laser level.  Dozer Dan is on it.  If you tune in next week (your choice), we’ll share any progress on Operation Orchard Rectangle. 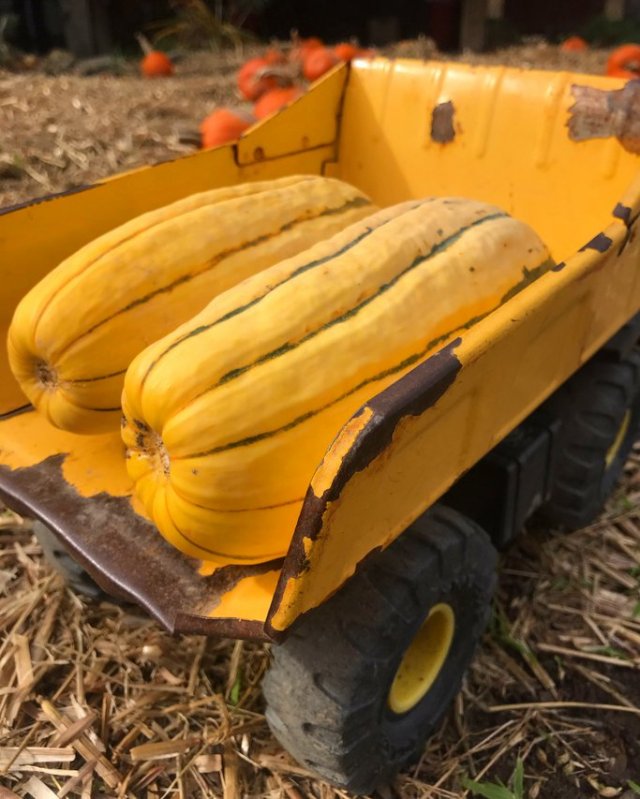