EVERY HARVEST SEASON, foodies come out of their kitchens to kibbitz in Franglish (terroir, anyone?) and gossip about pairings.  “This booze gels with that bologna.  This Velveeta shines with that saltine.”  It’s a heady business.  If you can stomach it.  But it didn’t start with the millenials. 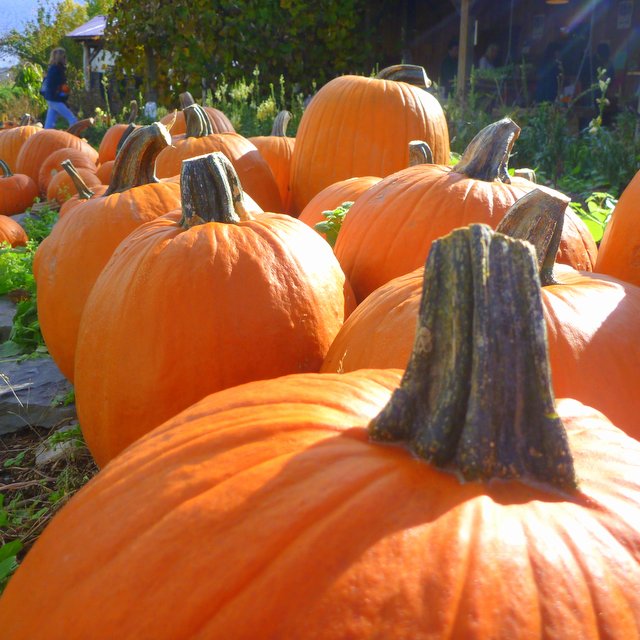 “Pumpkines Payre withe Pumpkines” – In her legendary medieval tome, The Locavore’s Cornucopia, Madame d’Veg (1066-1199 C.E.) suggested pairings which were considered outrageous in her day, but they show prescience on a par with the great Nostradamus.  Her boldest claim:  Pumpkins pair with pumpkins.  We are honoring that notion, one millenium later, with a 5-for-$20 sale on pumpkins!  ANY SIZE!  Pick 5 pumpkins for $20.  Pick yours in any patch on the farm.

“Orange Gourds Do Goe withe Red Bags” – Even the doyenne de gastronomie could not have foreseen our Dozen Dollar Pumpkin Pack.  Or could she?!  Did she?!  In her honor, you can fill our new red bag with pumpkins for just $12.  Keep the bag.  That’s the whole point.  It’s reusable.  Duh.  Get with the zeitgeist, people!  Reduce, reuse, re-apple.

“Apple Pycking and Familie Time” – Friends and families wandering the orchards.  Just as it was in the middle ages.  Except cellphones have improved.  And the apples are different.  But same idea.  Now picking:  Mutsu, Red Spy, Splendour, Cortland, Red Delicious, Rome Beauty.  This is the LAST WAVE of apples for this season!  Come pick now!  Cute photo from loyal ‘Creekniks @hookedproductions.

“Bigge Green Apples withe Artisticke Humours” – Mutsus are those big, green, crisp, honey-sweet apples famed since yesteryear for their versatility.  Great for eating fresh, baking pies, and, if you are an advanced Farmketeer, making bunnies.  And it’s vegetarian and no bunnies harmed.

“Donuts and Weekendes” – Long before the weekend was a thing, and eons before the communists turned it into like a human right, Our Lady of What-Goes-With-What predicted that fresh cider donuts would be the perfect complement to your Saturday and Sunday routine.  Served 10 to 6 PM.

“Payres Payre with Crisping” – You can choose from our panoply of pears at the farm stand, take ’em home, slice ’em up, toss ’em in the oven at 225° and forget about ’em.  Hours later, a beautiful guilt-free snack.  Shown:  Shenandoah pear crisps.

“Squashes and Onyons” –  If there ever was a tough-skinned vegetable with delicate insides, it’s the delicata squash.  They don’t store well and you can really only get them now.  ‘Tis the season, ’tis delicious.  Sear with onions.  Sprinkle with feta?  Also still picking in the vegetable fields:  some peppers (hot and bell), plenty of eggplant (but ask about our secret row if you want classic rather than Japanese eggplant), just a few cherry and heirloom tomatoes.  Plus Brussels sprouts and several kinds of winter squashes.  Make soups and stuff.

“Orchardes and Magyck” – Yes, we will return to Wizarding Weekend at Press Bay Alley on Saturday, Oct 29.  But this year we will also have a special day (Wizardween?  Potter Party?) at the farm on Sunday, Oct 30, 10 to 6 PM, in celebration of the dark arts.  You can catch the Hogwart’s Express (wagon rides), see a free puppet show at 2 PM, and get pumpkins, apples, donuts, cider, caramel apples, and more.  Basically a normal fun Sunday at the farm with a few magical extras and YOU SHOULD TOTALLY WEAR YOUR HALLOWEEN COSTUME TO TEST IT OUT.  It’s kinda the last big Sunday of the fall so come join us — rain or shine!

“Paynts and Childes” – This Sunday you can pair your child with our facepainter Ella from 12 to 3 PM.  She’ll be at the farm stand turning your kids into works of art – Oh, they already ARE works of art?  Of course they are.  They’re masterpieces.  But a little paint can do wonders.  Not just for kids! 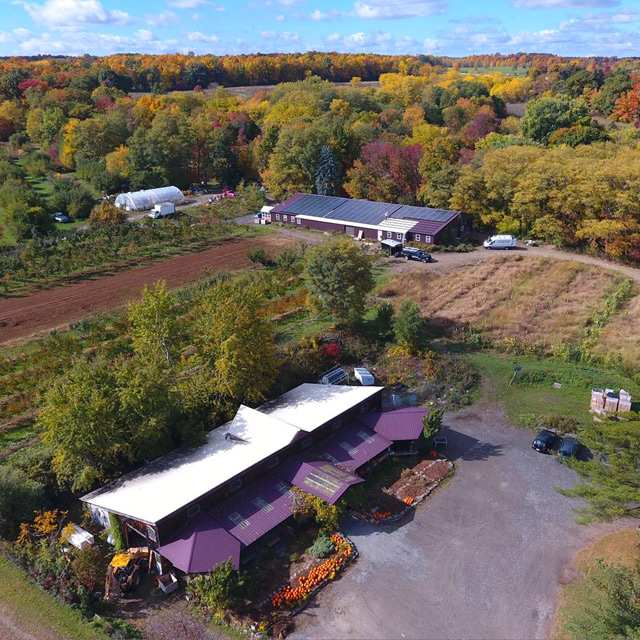 “Farmes and the Powers of Sunshyne” – Not even Nostradamus saw this one coming.  The ‘Creek is going solar!  We’re pairing our barn roof (background) with panels by our neighbors Renovus Solar (thanks for pic).  This is a big deal that will fundamentally change how the farm uses energy — and even put net juice back INTO the grid.  The installation is in progress, so just a sneak peek for now.  More news to come about this delicious pairing between the farm and Renovus.  Hope to see you at The ‘Creek.